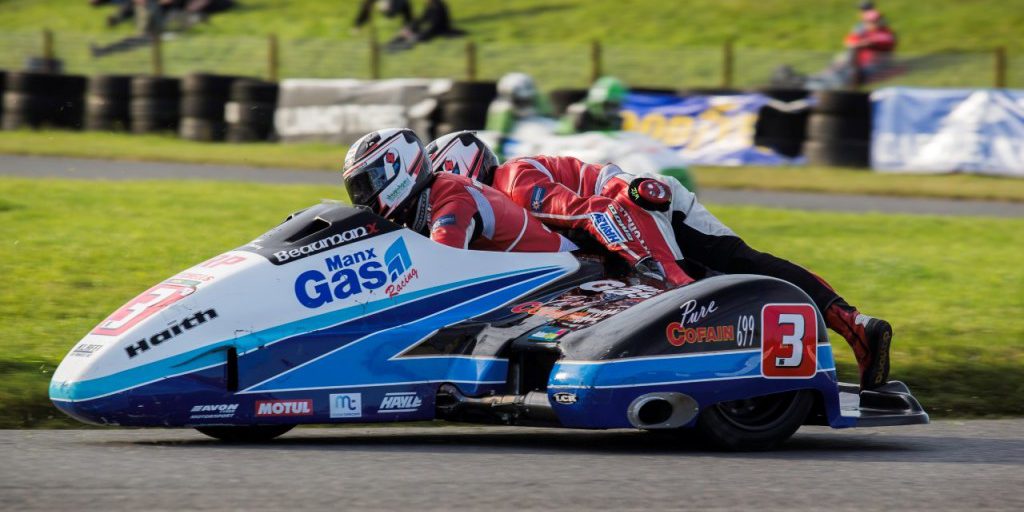 Mansfield sidecar racers Ben and Tom Birchall were at Darley Moor race circuit in Derbyshire at the weekend where they won the sidecar race at the Stars At Darley meeting.

The Mitchell’s of Mansfield supported team recorded the fastest lap during qualifying and began the 15 lap race from pole position. Using the F2 machine that took the double win at this year’s TT races the pair didn’t get the best of starts but made their way through the pack to take the lead on lap three heading the field for the remainder of the race.They extended their lead with each passing lap and crossed the finish line for the win with an advantage of 21.97 seconds over Knight/Fishwick.

Ben said: “We like to support the Darley Moor circuit as its local to us and they help us a lot with our TT testing. We were riding our TT winning outfit but transferred the Honda 600cc engine from our world championship F1 machine to the smaller F2 chassis for the Darley race. It proved to be extremely fast and reliable and we gave the engine a good work out prior to our race at Brands Hatch this weekend.”

Ben and Tom will be riding in the final round of the British F1 Sidecar championship on the F1 LCR using the 600cc Honda that is being developed to contest the World championship in 2016 when new rules will apply to engine capacity.

The final two races of the British championship take place on Saturday at the Kent circuit as one of the support classes to the British Superbike championship where free practice takes place on Friday at 12.50pm. Qualifying takes place later in the day at 5.15pm and will set the grid positions for the start of the first 10 lap race on Saturday which is set to commence at 1 27pm. The final race is scheduled to start at 5.05pm on Saturday afternoon.

These two races will conclude the Birchall Brothers calendar of racing for the 2015 season and Ben will spend the winter months continuing the development of the World championship F1 machine and prepare the F2 outfit for the TT races.