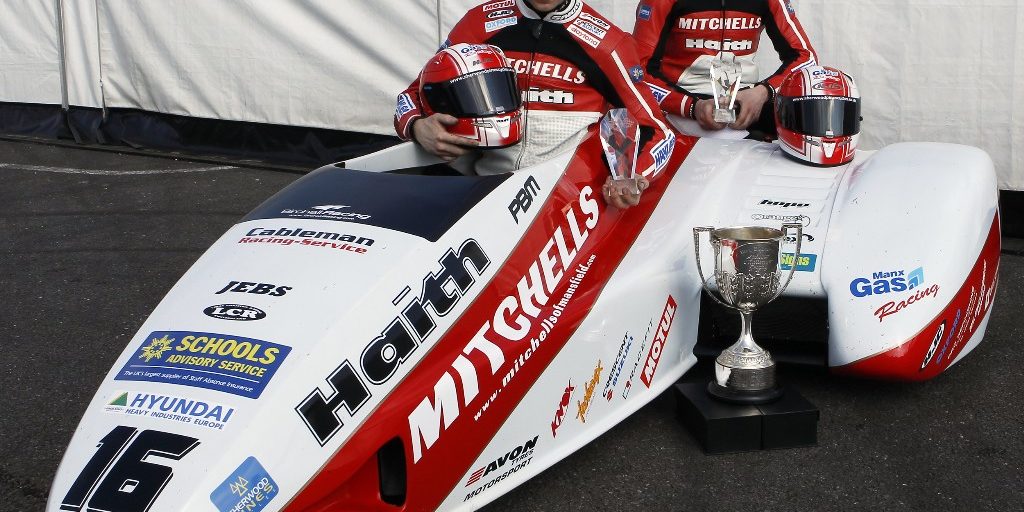 Riding their LCR Suzuki F1 outfit world championship sidecar riders Ben and Tom Birchall were competing at Donington Park over the Easter weekend in the first round of the British F1 Sidecar championship. The Mitchells of Mansfield supported brothers were in a class of their own as they stormed to victory in both races.

Starting from a front row grid position Ben and Tom got the hole shot into Redgate in the first race and never looked back, stretching their lead to 19.94 seconds as they crossed the finish line for win number one setting the fastest lap of the weekend with a 1m 34.575s time on lap two of 12.

Race two went much the same way with the Birchall boys once again taking a lights to flag victory, this time with just under a five second advantage over the second placed riders.

As well as clinching the championship lead on 50 points the pair once again won the Bill Boddice Trophy for their stunning performance in the first race.

Ben said: “We are delighted to take the double win here at our local track of Donington Park and also to set the fastest lap of the weekend and we are honoured to be awarded the Bill Boddice Trophy. This strong showing sets us up nicely for the first round of the World series that takes place at the Leicestershire circuit next week. I have to thank our loyal sponsors for their ongoing support as without their input we would not be able to race at this high standard of racing.”

The next race for the Birchall brothers is the first round of the 2015 world championship where last year they ended the season in second place. The race takes place at Donington Park on April 12 and is the first of two rounds to be held in the UK this year, the second being at Brands Hatch in July.