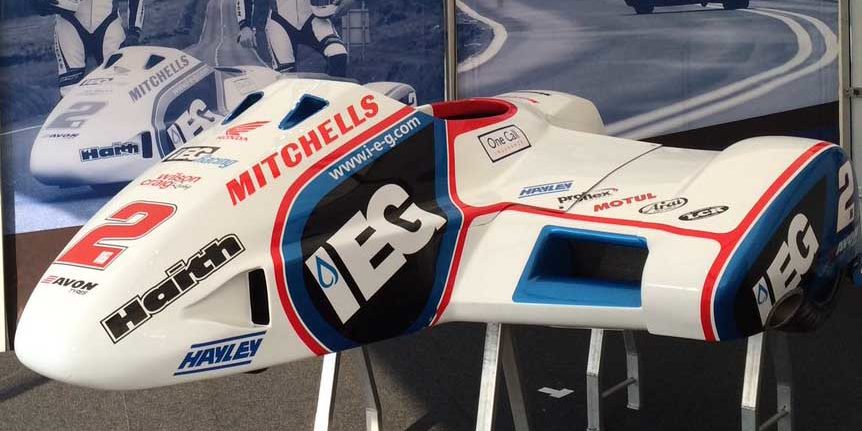 Before Saturdays first Sure Sidecar Race had even begun we already had news that would effect the race outcome.

Firstly we heard on Friday that Conrad Harrison had to withdraw from the race after losing two passengers in a week and just before the race got underway on Saturday we heard the sad news that Dave Molyneux and Dan Sayle would not start Race 1 due to a technical issue.

The show goes on

First away from the start line were Ben and Tom Birchall, on their IEG Sponsored LCR Honda, they blazed away from the line and into the distance on the way down to Bray Hill and as the teams sped their way into Glen Helen it was Holden and Winkle to emerges first, ahead of the Mansfield team. As they races toward Ballaugh, Holden and Winkle had drawn out a significant gap of +4.583 over the Birchall Brothers with Reeves and Farrance following on +2.834 further back.

Next up was the Sulby speed trap and it was Holden and Winkle again topping the chart with a top speed of 145.6mph ahead of Reeves and Farrance at 144.9 followed by Ben and Tom Birchall clocking 143.4

By the time we approached the Ramsey hairpin, Holden & Winkle had stretched their lead further to over 6 seconds, continuing the fine form they had shown in the run up to the race in qualifying. Tom and Ben fought to stay in contact and seemed to have stemmed the flow of lost time as they got to the Bungalow where they were again 6.5 seconds behind, but as the race started to take shape, the red flag was out.

There had been an incident at Rhencullen and the race was stopped, Ben and Tom were safely out of the way of the incident and made their way slowly up to Parc Ferme to await further instruction.

Flags out at Governor’s as the sidecars came round on lap 1 #iomtt #iomtt2016 pic.twitter.com/WGM73227gL

Take a look at the video below to see action from 2011 with Holden and Winkle on the way up to Rhencullen, the scene of todays incident.

As news started to filter through it still wasn’t clear who had been involved in the incident or if there had been any significant injury.  The incident was quickly cleared but had left oil on the track and as such, was going to take time to clean up. It was later announced that the organisers were hopeful of a restart and another announcement was to be made at 3pm

Sidecar race is red flagged, on the bright side it makes them easier to film at brandywell! pic.twitter.com/fdtswgl4rb

News slowly filtered through that the Sure Sidecar Race 1 would have a full re-start at 4pm but worryingly we still had no news as to the status of either the driver or passenger of the sidecar involved in the incident.

As we headed down to Glen Helen the first machine into view was the Birchalls IEG LCR Honda, followed a second later by Holden and Winkle and they were also quickly followed by a visibly quick but ragged Reeves and Farrance.

The top 3 teams went through Ballaugh Bridge in a flash but still in the same order, with the Birchalls just over 0.7 of a second in the lead. The Sulby speed trap saw the teams go through at 144.9 for the Birchalls and 145.9 for the other two followers.

The Birchalls flew into Ramsay hairpin at tremendous speed, closely followed by their nearest rivals Holden and Winkle but the Birchalls were putting in a tremendous effort and had opened up a gap of 2.354 seconds. The Mansfield team seemed to be putting in a more determined effort as they sensed the Holden/Winkle duo slipping back and that was certainly the case as they went through bungalow with the lead now stretched out to 4.374 seconds

As the Mansfield leaders hurtled through Glen Helen for the second time on the LCR Honda, it was clear that the lead was now becoming significant, we had to wait 9.228 seconds before we saw the chasers came through. Ballaugh was almost blur as the flying Birchall brothers blasted through 10.579 seconds ahead of their nearest rivals.

The Sulby speed trap proved how consistent these guys are with the top 2 fastest teams posting exactly the same speed on the second lap and the Birchalls being just 0.3 mph slower than the previous lap.

13.054 was the gap by the time they made it through Ramsey and this was further extended to  18.324 as the Birchalls showed what a classy outfit they are but there was no sign of the brothers slacking off the pace as they were the quickest pairing through Bungalow.

As we completed the second lap it was clear that the Birchalls were now in full flight, putting in a new lap record of 116.798 and nonchalantly riding away into the distance, leaving the rest of the field in their wake.

By now it was becoming something of an embarrassment as the Mansfield double act carved their way through Glen Helen with an impressive gap of 29.087 seconds.

As the lap progressed it was clear that last years winners were not thinking about conserving their machine and the gap between themselves and the next nearest pairing of Holden and Winkle further increased, with a new lap record under their belt and a win more or less in the bag, inspired riding bought the LCR Honda through a full 34 seconds ahead of their rivals.

But it wasn’t to last as disaster struck at the Sulby crossroads and the Birchalls were forced to pull up and retired with a technical issue.

Victory was handed to Holden and Winkle with the duo of Peter Founds and Jevon Walmsley, over 54 seconds back and crossing the line almost at the same time as his brother Alan founds with passenger Aki Aalto.

What a race! But it’s not won until your across the line. So well done to Holden and Winkle for taking the victory but ultimately we can only feel gutted for Ben and Tom when they had clearly decimated the field for the whole of the race.